Having painted up a load of merchant ships I wanted to do a convoy action, but given the number of ships I knew it would have to involve some off table movement. I set up a situation on the map with the convoy escorted by three squadrons under De Ruyter, Evertsen and Tromp attempting to pass through the Straits of Dover, unaware that the English fleet is out looking for trouble. Although the fleet sizes are similar, the English have the distinct edge with their larger ships and heavier guns. 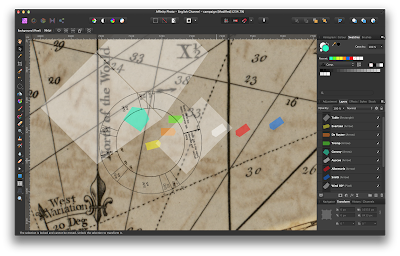 After 24 hours of sailing with mostly light winds, both fleets are becalmed and anchor for the night. At dawn the fleets are in sight of one another about 8 leagues SW of Beachy Head. A light north westerly springs up, giving De Ruyter the weather gage. Ayscue's White squadron is isolated to windward of the rest of the fleet and the Dutch bear down on him. Ayscue gives ground to leeward to allow the Red and Blue squadrons to come up and De Ruyter, not wanting to  be dragged too far from the convoy, calls off the attack and hauls up on the larboard tack. 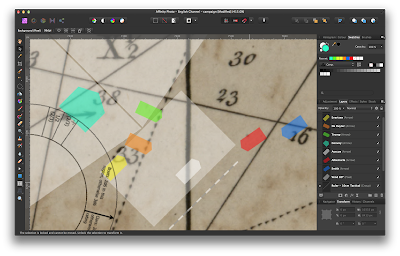 After the English tack the White squadron is again isolated from the rest of the fleet. De Ruyter decides it's now or never. If he allows the English to form their squadrons in line they might be able to cut off the convoy's advance. If the English give too much ground, then the convoy will be able to slip past them and through the straits. 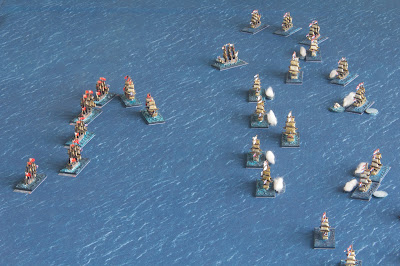 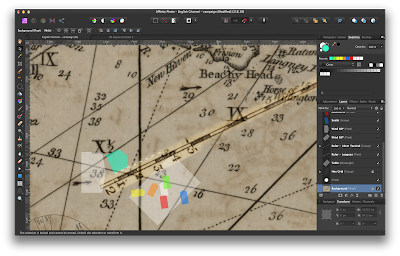 From 08:00 to 08:15 the wind backs to westerly and freshens. This changes everything. The weather gage is now contested as elements of Tromp's and De Ruyter's squadrons are now to leeward of the English. Worse, the convoy's current course means that the English can form line to leeward at their leisure and still be able to head it off. It's a precarious position and De Ruyter orders his fleet to haul up on the larboard tack and signals the convoy to come about on the opposite tack. 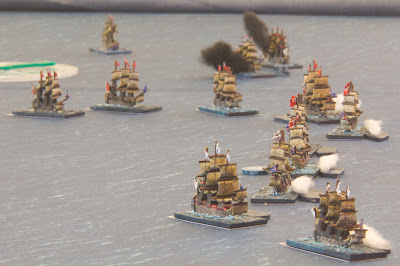 While all this was going on there was an entertaining sideshow. The Yarmouth mentioned earlier, being the last in line of the White squadron, has borne the brunt of De Ruyter's attack. Dismasted and adrift but with her colours still flying, she is set upon by two Dutch frigates - the Nijmegen and Harderwijk.

During this time Harderwijk attracts the fire of the Red Squadron passing to leeward. She catches fire and although the ship is saved the crew strike their colours. 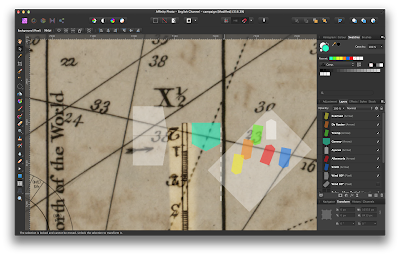 The White squadron has suffered the worst -
The fourth rate Yarmouth sunk
The third and fourth rates Gloucester and Happy Return have lost masts and their rigging is in shreds.
The fifth rate Oxford has serious fire damage.
The second rate Swiftsure and third rate Fairfax have come through relatively unscathed.

The Red squadron -
The third and fourth rates Dunkirk and Mathias have each lost a mast, but otherwise the squadron is intact.

The Blue squadron didn't manage to engage and so is untouched.

Rear (Evertsen) -
All undamaged apart from the fouth rate Stad Gouda which has medium damage.

Both fleets will need to make running repairs, which I will have to make up some rules for. I have some vague ideas how it'll work. I suspect we'll then see a running fight with small pockets of damaged ships being picked off, and hopefully we'll have the merchant ships make an appearance on the table. Should be fun, but it'll have to wait for now as I have some other things to get on with. This one's going on the back burner for a week or two.
Posted by MattH at 16:31